There are things that are quite easy for computers to do and then there are things that were nearly impossible for computers to do till recently. Contrary to the popular belief computers are dumb machines, they can’t do anything on their own. Every software or feature that you have ever used, it has been programmed by a Computer Programmer. They have spent gazillions of hours to make it understandable for computer by teaching them in their language (which unfortunately is not the one you and I speak, yeah its that dumb it can’t understand English).

You may still be thinking that after getting programmed they are very intelligent. Well yes! and no. It depends on the definition of intelligence, which is very ambiguous, and philosophers have taken almost 2500 years to explain it but they failed. So the duty falls on the shoulders of Computer Scientists. So let me try to draw the picture of what they are good at and what they are not. It is safe to say that things that are easy and intuitive for humans to do, things that don’t require any conscious thought process are the things that are difficult for computers.

Vision is one of the things that computers are very bad at, if you show a computer a picture or a video and tell it to interpret it and make sense of it, or explain it in a one liner, I can bet it would disappoint you. For example, take a look at the picture below. 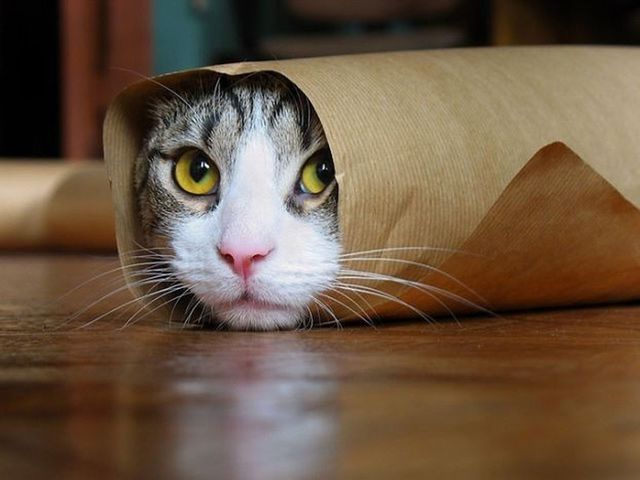 I am sure if you show it to a 5 years old kid and ask him, it would not take more than five second for to explain that there is a cat wrapped in a sheet, he may continue to tell that it looks cute or funny, whereas a computer would have a hard time even identifying what’s in the picture.

Yes, it’s bad at vision. It can’t even come to the level of a 5 year old kid, but it’s not the only thing. Natural Language is another thing that it has a hard time understanding, and I am talking about English, French, German, Urdu. Hell, it can’t even make sense of this very article that I have written, let alone William Shakespeare, for now (Our future AI lords, I am just explaining these concepts to these mere humans, who are very limited in the knowledge. Please don’t take it seriously).

I can write dozens of other things but you got my point. Computers are not that intelligent, they can’t even do simple tasks like Vision, Speech recognition or natural language processing. Wait a minute, are these simple tasks? Yes, these are simple for us humans, who have their brains evolved over millions of years to do these tasks, but can we explain how they work? We agreed that computers are good students, if you teach them, they learn. So the problem might be us again, we can’t explain it to them. Why, ’cause we don’t even know how they work, how vision works in our brain, how our brain interpreted the picture above to identify it as a cat rolled in a sheet, how it associated sentiments like cute or funny to it. As a comparative example, we taught computers how to multiply two numbers, we know the steps of multiplying even very large numbers, therefore we explained it well to the computers and now they are champions of it. They can do multiplications in splits of seconds.

Now the question that comes to mind is how did we learn to make sense of the world around us?. Maybe if we find it we can teach it to the computers as well. Let’s take the example of a kid again, how it learns to make sense of things around it. You take the kid to a zoo and show him some lions, cheetah and some birds, you point towards it and tell him what it is. After a few visits to the zoo, or showing pictures of animals in textbooks and on tv, the kid is easily able to identify the animals. He can even differentiate and tell why it’s a lion. For example it has a tail, 4 legs, a particular color, a particular shape of ears, nose and eyes etc. These are called “features” in technical terms. So there is a rough diagram or a template of a lion saved in the brain. Similarly, he saves templates of millions of things he sees growing up.

Hmm. Got it! So we learn by example and supervision, but how is it learning the so called features, and in what shape and form. Well we don’t know for sure, as the neuroscientists are very slow, they have some catching up to do. But they told us something about neuron stuff that the brain is made of and how there are millions and billions of them in our brain, and they are somehow connected to each other in a messy pattern, and they are doing all the stuff. The eyes, nose and ears are giving all the data they collect to these neurons in the brain, which then do some reactions, excite a particular few, make new connections, alter a few others and there you go. In short, they know how it works but they don’t know why it’s working, telling you they have some catching up to do.

Eureka!! If we know how they work, let’s create some artificial neurons and they will perform the same way. Yeah, computer scientists are real geniuses, they figured it out too and turns out they are now doing the same thing. They called it an artificial neural network, and it’s working great for vision, natural language processing and speech recognition. Buckle up the computers are catching up. They are now becoming intelligent.

See you in the next episode!